Here I’m posting some videos for you to enjoy these summer holidays. Don’t hesitate to play them when you’re bored, when you’re with friends, in the morning, in the evening, at a “revetlla”, in a “verbena”, at a party… and get dancing and rapping your heart away!!!

Have a fantastic summer, my little friends! ❤

Give these carols a try and have fun! 🎅🎄🎅

I’ve just come across this video on the net and I thought I’d share 🙂 I thought it was really beautiful. Enjoy it!

The Solid British Hat Band and my own learning English memories

I just couldn’t believe it when I came across this song my 1st BUP EFL teacher, Mrs. Àngels Bogunyà, used to play in class: I’m walking down the street (Present Continuous), by The Solid British Hat Band. It really made my day 🙂

And what about this other song, Mr. Monday (Simple Present)?

[Wherever you are now, Àngels, you’ll never know how many times I’ve fondly thought of you. I’m still so grateful for your patience and hard work!]

Once again 2nd term has finished and I can hardly believe that I got this far. A year ago I was still getting my chemo (immunotherapy) sessions and was still waiting to be operated for the fifth time within a year.

Amazing as it sounds, I’m ready to start Easter holidays once more and I couldn’t be more grateful for having gotten up to this point. For the first time in two years I’m wishing my students the best Easter holidays possible ♥!

A lovely present from a cutiepie little kid, Alex :-)! 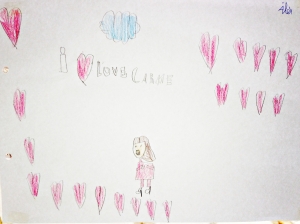 Posted in happiness, mine, mood, smile

One of the most beautiful songs I’ve ever listened to, Adele sings her best at Chasing pavements and here you’ve got the new karaoke I’ve just found, for your pleasure.

Her new album, 19, is a masterpiece full of good taste and sensibility, her voice and the songs in her CD are the perfect match to a cloudy seaside afternoon stroll. So I’ve just subscribed to her Youtube channel to have all her songs ready to listen to. Now what are you waiting for? 😉

Goodbye Yellow Brick, by Elton John. And, no doubt, George Michael’s duet with John in Don’t let the sun go down on me.

Posted on March 23, 2007 | Leave a comment
There’s a little paper craft back at school that I found several days ago at The Toy Maker. It consists of a Thanksgiving candy box with six Thank You coins. I though it was a nice paper craft for children to make and also for we, grown-ups. Just think about it -it sounds like the desert island question-, who would you give your six coins to? You’ve got only six, so you must choose most accurately six people -animals are admitted too, according to my very own rules- you would give one of your precious -and scant- coins.

What criteria would rule your gratitude? Would you give them out all in a while? Would you wait for one of those special occasions to give them out? Would you mind if your family and friends found out what you were doing? Would you exclude people who only occasionally did a favour to you? Material favours? Family or friends? Would you include your colleagues too?

Aren’t you thinking how stupid these questions are? Why are we -you and me- wasting our time with this Thank You coins stuff? As far as I’m concerned this is a recurrent type of ideas coming to my mind when I’m extremely tired. My brain eludes to take charge of major ideas such as projects, commitments or whatever I’m supposed to respond to and easily sails away and meets these thoughts in its way. And then just lets them sail on by. And it’s then when I feel reasonably happy and at ease.

Posted in happiness, mine